Back in the '90's, I jumped right in there with all the other consultants and IT operatives when Business Process Reengineering came along. Since I had been heavily involved in computer graphics before that, I even wrote a crude business process designer so we could abandon the yellow stickies on the walls and halls as well as all the tedious documentation (and re-documentation). BPR evolved to BP'X', and by the time mainstream BPM software came along, I was working on developing software to handle the data flows across all the systems involved in what I called at the time, "Decision Support Chains." 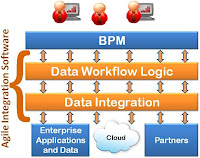 I lost touch for a while with what BPM in general was doing and realized later that most of the products probably actually began with the design and documenting of the processes. I opined that they were started contemporaneously with my similar effort, and were abandoned in favor of Y2K gold. Once that was over, maybe they picked up the old code, dusted it off, and went on from there. Most started with design and evolved to handle complex as well as practical of business process management, but the necessary and tough behind-the-scenes integration has been generally assumed to be outside the discipline. There still appears to be a missing layer or two.

With the great tools now available to design, model, optimize, and automate human workflow, it seems that the toughest part of a full implementation of new processes, or automating old ones, is the ability to get the data where it needs to be when it needs to be there. The necessary overhead and inherent inflexibility of data integration are very often so prohibitive that they kill projects before they even get started.

Agile Integration Software (AIS) working with BPM provides the complete "stack" of necessary functionality. AIS fills in with rapidly configured, adaptable data integration, along with the data logic layer that interacts with the BPM layer, triggering data flows as needed exactly when the process and participating decision support applications require it.

All the overhead of designing and maintaining staging databases goes away along with the resultant data latency. The cost of BPM implementation is greatly reduced, and the solution is able to respond as quickly "under the covers" to business change as it is on the BPM layer!

When BPM inherits all of the features and assets of AIS, BPM become agile, too.